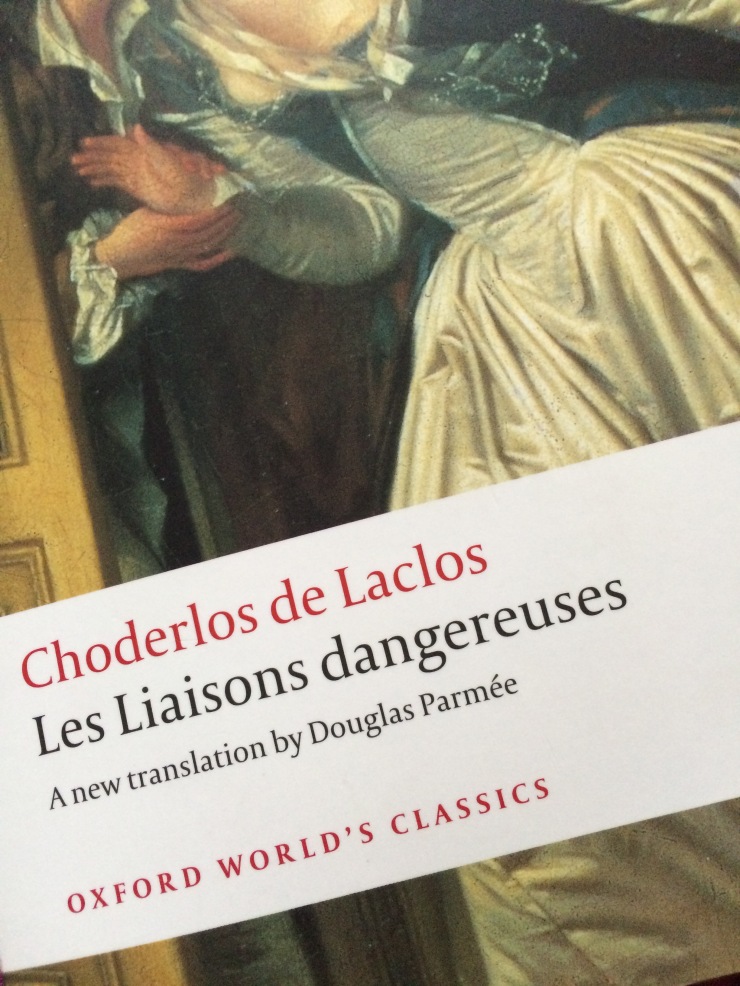 This book was a recommendation from years ago. Now having finally read it, I find I was thrown into an intense exploration of social manipulation. First published in 1782, the novel is written in the epistolary style, but unlike Samuel Richardson’s Pamela that focuses on the letters of one protagonist, the number of protagonists and antagonists are doubled or even quadrupled in Les Liaisons. I am still feeling the aftershocks of reading this novel which is surprising because I was not expecting much in the way of ‘realism’ or ‘believability’. However, I was intrigued by the volume of characters and how they may all be relevant. I will also note my reading of the novel was made far easier by its translation in 1995.

Fortunately, the volume of characters is not superfluous, and after the first eyebrow-raise (I was not sure whether the Marquise de Merteuil was actually the Madame de Merteuil, but she was addressed under both names), I was struck more by the actions of antagonists rather than the protagonists. Reading the novel was a study of cause and effect, and more than anything else: dramatic irony. Of course, there are parts I find unbelievable, such as the feelings of Madame de Tourvel, but Madame de Tourvel, Cécile Volanges and everyone but the antagonists play the role of balls in a game of pinball. It is the interaction between the antagonists that escalates the drama. The Marquise de Merteuil and Vicomte de Valmont are instead both flippers flinging whomever they wish into the air and bruising their victims on pins along the way.

There is much I would like to discuss about the novel, particularly the use of other novels within its letters. At one point Clarissa, another novel by Samuel Richardson, is sought out as guidance for one character (p. 239) in order, I imagine, to prevent succumbing to pressure. At the same time, the Victome, who is exercising this pressure, also discusses the same novel, writing that ‘It wouldn’t be difficult to slip into her house […] and turn her into another Clarissa’ (p. 245) and just before this, explains how he is formulating his plans by ‘vainly going over every known way, in novels’ to take advantage of the woman he is chasing. The protagonist seeks guidance and warning in novels, but the antagonist seeks formulation in the very same. In showing this duality, Choderlos de Laclos gives novels a dual purpose.

Much like we might see the crime novels and crime shows of today as a way of unintentionally teaching a criminal how better to avoid the law, the ‘romance’ or rather novels of sensibility or Gothic novels in the 18th century show the way in which one might succeed in using people. Moreover, there is a moment where the Marquise likens her own management of multiple affairs as a crossover of the roles of writer and actor. These two roles are flagged as subversive. (What do English Literature students appreciate better than the subversive?). It is up to the weight of the ending of the novel to determine whether these roles are reconciled. *Spoiler alert* The writer puts the antagonists in their place. *End of spoiler*

I am aware this review has become rather dense, so I am cutting it short to get down to the real question: Would I recommend this book? If you feel inclined to reach into history and find humanity at its worst—that is, self-centred, selfish, self-serving and self-satisfied at the cost of other people’s peace of mind—then I recommend this book. I recommend it as an unusual self-reflexive analysis of novels, fiction and people, as both a guidance and as a realisation of its subversive application. This novel does more than examine dangerous liaisons between humans. Ultimately, the novel critiques the dangerous relationship between exploitative humans and their limited knowledge.